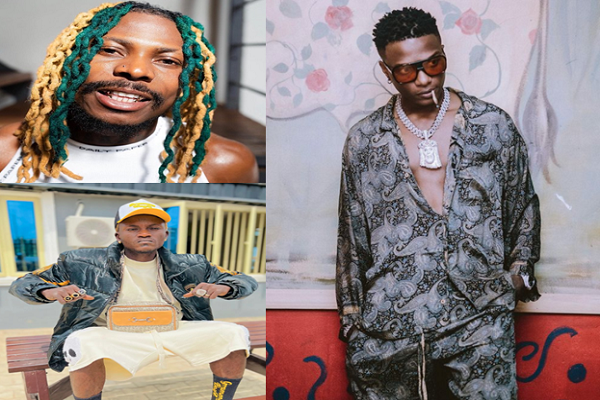 Controversial street-hop artiste, Portable has spoken against the comparison of YBNL’s Asake to Grammy-winning star, Wizkid.

The streaming platform also noted the album broke the record for the biggest opening three days for an African album in Apple Music history.

Having achieved such a massive feat in a short while of springing into limelight, social media users kicked off a comparison contest between the rave of the moment and Biz Wiz who is well known to have broken several records in the course of his musical career.

The most recent is his fourth studio album, “Made in Lagos”, which has surpassed more than 500 million streams on Apple Music according to Africa Facts Zone thus, attracting a whopping N2.11 billion estimated earnings.

Appalled by the comparison, the Zazu crooner hushed social media users against such.

Addressing Wizkid as a ‘big man’, Portable argued he belonged with the big wigs like Burna Boy, Davido and Olamide.

“Don’t compare Asake to Wizkid. Wizkid is a big man! He is a boss. He belong to the set of Olamide Baddo, Davido (ogo awon Baba Imade), Burna Boy (Gangster Lii, African Giant. They are all in the same set”, he said.

But for Asake, portable claimed they belonged to the ‘same set’ especially since it was through Baddo’s influence they got shot to the spotlight.

“So, Asake and I belong to the same set that emerged from Olamide,” Portable added.

*From the Album; The Unstoppable 2010 SMVA Award winning album and International edition of 2face Idibia's third album, "The Unstoppable",including hit singles; "Enter the...